A DEFENSE OF “THE ABSTRACT” 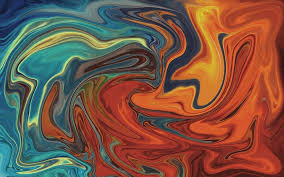 Nolan Lee, Staff Writer
A great many people much smarter than I have spent years upon years questioning what qualifies as “Art”. Are videogames art? Must art depict something? Must it be intentional? Must it be beautiful? Does it need a meaning, a message, or anything else? What is art in the first place?

There have been some conclusive answers for some of those questions, but the last one remains contentious.

Upon consideration, one might realize that the physical reality of art can’t be differentiated in a significant manner from other types of creation deemed unartistic, between an author writing a book and a stenographer recording courtroom procedures. The difference between what is art and what is not art exists solely on an abstract level, within human convention and conception, which can all make it seem rather small, at times.

It’s also all rather dense, these ideas of art. When you first read “Art”, you probably thought of a painting, a song, a dance. In all honesty, this is likely a purer way to enjoy it, not thinking of what makes it art, if it even is art, or anything else. You either like it, or you don’t. Yet it all goes much deeper, into performance, politics, meta-commentary on art or the art institution, etc.

But one category of art, likely one of the most famous, that lies beneath the surface of all this density is abstract art. Abstract art is defined as art that does not attempt to depict reality in any manner, rather using color, shape and angles to create something… conceptual. In this manner, it descended from Impressionism, which used similar techniques, though with a different goal, to create an “impression” of a scene or vignette. It was, and is, a challenge to understand, and difficult to immediately grasp in the way you might with Renaissance portraits.

It’s survived modernism, postmodernism, and the rather confusingly named period of post postmodernism in which we currently live. Of course, many of the aforementioned movements are explicitly about escaping limitation and definition, so perhaps the entirety of this paragraph was a mistake, applying definite categories of art to definite movements.

People very much dislike Abstract art, judging from my conversations and the myriad of “reddit” posts, “Youtube” videos and tweets dedicated to the censure of it. The division of contempt is unclear, yet clearly present, on the sliding scale from photorealism to blank page. Cubism is fine. Pollock is respected, yet there’s an ever running thread of contrarianism against him. Mondrian can hang in a hotel room. White on White by Kazimir Malevich? Directly into the garbage.

The most famous abstract artists, and  the most maligned, are likely the abstract expressionists, though most won’t pretend to distinguish between them and the abstract impressionists, or Russian painters, or other kinds of those steeped in abstraction. It in all honesty doesn’t matter too much. Those often disliked post-WW II artists, perhaps the most famous phrase following them is “I could do that”. There are sophisticated criticisms often leveled against the expressionists, but they aren’t ones I’m interested in making, nor the ones that I have to answer.

The not-often-enough-used phrase that you should say in response is, “But you didn’t”. Remind them that there is no objective beauty; that beauty doesn’t exist, and that even if it was so easy to depict, they simply couldn’t put in the effort to do something so simple.

There’s a narcissism in all of it. Not understanding why something hangs in a museum doesn’t mean it shouldn’t be there. Not understanding the meaning behind something doesn’t mean there isn’t one, or that there even should be, though I do think that art institutions haven’t exactly made an effort to bridge the gap between high art, avant-garde art, and that which is enjoyed by average people.

The crevice between hard-to-interpret works bought by rich white men, and art that addresses actual issues faced by real people seems impossible to pass, at times.  They can coexist, but it certainly takes work, and I understand the resentment that the struggling may feel upon seeing billionaires buy barely-there artworks for millions of dollars, all for the right to hang it up in their mansions and their yachts. Painting itself often seems an increasingly irrelevant medium, not cared about by the vast majority, dispersed and non-centralized since the internet’s advent, expensive materials replaced by digital drawing programs.

But should one judge art by the capitalist farce that surrounds it? That would be unfair to the art. Art stands on its own merits, its greatness only in your eyes; never based upon the world surrounding it.

If you asked somebody what art is, they’ll give you a romantic answer. “An expression of human creativity,” they might say. “Beauty,” the one word response we’ve so far discarded as an objective measure of merit. It takes creativity to be Jackson Pollock or Piet Mondrian, to pioneer a new art style outside of norms and convention, and it’s not the right of me or anybody to impose their view of beauty upon it.

You are allowed to dislike abstract art. I find most of it rather uninteresting, but the truly beautiful thing about art is that it is invariably human, made by humans, enjoyed by humans, and analyzed by humans. When have humans ever had a clear and distinct authority on what is right and what is true? Thankfully, this matter is of less importance than politics or philosophy or complicated semantics.

Enjoy what you enjoy, and allow others to enjoy what they enjoy, while acknowledging that neither of your tastes reign supreme.