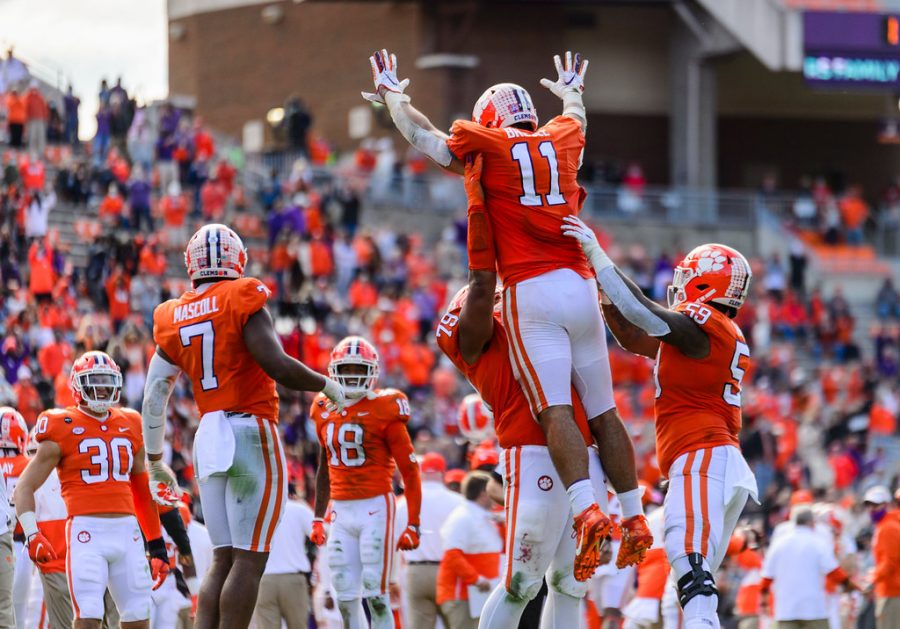 The regular season of college football came to a close this past Saturday with a “Rivalry Week” to remember. However, this season’s chaos has made determining the best College Football Playoff rankings incredibly difficult. Does Ohio State still deserve a top-five spot after their lop-sided loss to Michigan? How should the Big 12 Conference be valued? Where do you even put Notre Dame? Nonetheless, I’m here to settle the score. I present, Rudy’s College Football Rankings:

When you’re undefeated in the most competitive conference of collegiate football, you deserve the number one spot. Led by a defense jam-packed with four and five-star recruits, head coach Kirby Smart has brought this program back to glory. The Bulldogs have dominated in every game they’ve played, controlling the game with brick-wall defense and slow, yet meticulous, offensive play. Georgia plays Alabama in the SEC Championship this Saturday, a game that will determine much (or little) for the College Football Playoff.

Despite a scare against the unranked Auburn in this year’s edition of the Iron Bowl, Alabama is still the second-best team in the nation. With Bryce Young at the helm, this team is capable of scoring at any moment (as seen in the last minute of the fourth quarter against the previously mentioned Tigers when Young threw a game-winning touchdown with seconds left). While not as strong as Crimson Tide teams of the past, Saban’s 2021 squad is still impressive, as their only loss came on a game-winning field goal versus Texas A&M. Regardless, ‘Bama is still ‘Bama, and until the SEC Championship, the Crimson Tide deserve the second spot.

The Wolverines came up big last weekend with a spectacular victory over Ohio State in their classic rivalry. Jim Harbaugh had yet to beat the Buckeyes during his tenure as head coach up until this game, where Michigan’s offense ran all over their arch-rivals. Michigan’s rushing attack has been dominant all season, with Hassan Haskins and Blake Corum’s ground-pounding opponents in the Big 10 conference. However, I am hesitant to rank Michigan above Alabama, due to the level of competition, the difference of skill at the quarterback position, and coaching quality/credibility.

Oklahoma State has been one of the more exciting teams in college football this year. With a top-tier defense, the Cowboys have earned their spot in the Big 12 Championship, capping off their season with an instant classic win over Oklahoma in the Bedlam Series. Coach Mike Gundy has had one of his best teams in a while, and the ‘Pokes are poised to complete their season with a spot in the CFP. While difficult, I believe that Oklahoma State has a strong enough resume to make it, as they have a chance to defeat two top-10 ranked teams in back-to-back games. And if the Cowboys can conquer Baylor in the championship, OSU will certainly deserve a place in the playoff.

It would be heartbreaking for me to keep Cincinnati out of the College Football Playoff considering their undefeated season. However, I must take into account their resume and the strength of the schedule. Quite frankly, Cincinnati doesn’t play anyone. While they beat Notre Dame, the rest of their schedule is bland, filled with AAC and GO5 teams. It would be irresponsible to place Cincinnati over Oklahoma State. Nonetheless, the Bearcats have been outstanding this year under Luke Fickell. Quarterback Desmond Ridder has excelled, proving to be a top draft choice for NFL teams, and Cincinnati has generally cruised over most of their opposition. It will be exciting to see where the Bearcats end up in January, whether that be in the CFP or a major bowl game.

The Buckeyes seemed unstoppable prior to their loss versus Michigan. Quarterback CJ Stroud was putting together a Heisman-esque freshman season, receivers Garret Wilson and Chris Olave continued to shine, and coach Ryan Day sat atop his throne in Columbus. Until Ann Arbor, where the Buckeyes lost 42-27 to their arch-nemesis. Ohio State was shocked by Michigan’s defensive pressure, forcing them to make errant and radical decisions on the field. To ignore their previous success would be unfair, but a two-loss team that didn’t make their conference championship is an unignorable designation. While this spot is controversial and certainly unstable, Ohio State has not earned their place in the playoff, primarily because of their loss to “That Team Up North”.

Head coach Lane Kiffin is leading Ole Miss to one of the most successful seasons in school history. While they sit outside the SEC Championship, Ole Miss has won ten games this season, including a convincing win over in-state rival Mississippi State in the Egg Bowl (as the rivalry is nicknamed). Quarterback Matt Corral has proven himself as a top draft pick, carrying his squad with an explosive offense. However, the Rebels have a very minimal chance at the College Football Playoff, considering they have two losses, one of which came to an unranked Auburn. Regardless, Ole Miss could see itself in a prestigious bowl game against any number of highly-ranked opponents.

Notre Dame will forever be the anomaly of college football. Due to the team’s disaffiliation with any FBS Conference, Notre Dame schedules their own games. And once again, the Fighting Irish put together a successful season, yet raise questions about the strength of the schedule. In fact, Notre Dame started this season with plenty of skepticism, as they narrowly escaped losses against programs like Toledo and Virginia Tech. Nevertheless, Notre Dame has been trending as of late, showcasing supremacy in huge wins over Georgia Tech and Stanford. In my opinion, the Fighting Irish are best kept out of the playoff. Every year, Notre Dame is gifted a spot due to tradition, and every year, they get utterly demolished by an SEC or Big 10 powerhouse. It will be interesting to see what the committee decides, but their entrance into the playoff is out of their hands.

Baylor has turned things around this year under coach Dava Aranda. Despite their horrendous season last year, the Bears are back and better than ever. Fighting their way to the Big 12 Championship, Baylor has reached ten wins this season, including an upset over a previously top-ten-ranked Oklahoma. After Matt Rhule’s departure two years ago, questions arose over how Baylor would rebound and continue their success, and Aranda is definitely a good answer. Baylor has effectively zero chance at the CFP. Unless they win the Big 12 and other teams lose, it is incredibly unlikely that the Bears will be playing in Indianapolis this January.

The Spartans had a rollercoaster of a season this year with plenty of ups and downs. As for the bright spots, Michigan State upset their in-state rival in a game to remember. Additionally, Kenneth Walker, a Wake Forest transfer, boasted a Heisman caliber season, carrying Michigan State to their current record. As for the not-so-bright spots, the Spartans lost to Purdue at the height of their success. This loss was followed two weeks later by a complete embarrassment versus Ohio State. Yet Michigan State closed out their season with an exciting win against Penn State during a snowstorm. Clearly, the Spartans serve no place in the college football playoff. However, they have played well enough to be watched on New Year’s Day in a major bowl game.

The Best of the Rest

Wake Forest was a major surprise in college football this season. Despite being one of the smallest schools in the ACC, quarterback Sam Hartman led the Demon Deacons to a 10-2 record, with losses against Clemson and UNC. The Deacs earned their spot in the ACC Championship with a blowout win over Boston College last week, and they will meet the Pittsburgh Panthers in Charlotte, NC for the grand finale. As for Pittsburgh, quarterback Kenny Pickett has performed at the Heisman level all year, and the 10-2 Panthers will be ready for battle against Wake in what could be a high-scoring shootout. Across the country, BYU has formulated its winning season as an FBS Independent. With victories against programs like Virginia and Utah, BYU has succeeded despite the loss of their stud quarterback Zach Wilson in this past year’s NFL draft. Speaking of Utah, the Utes have stunned opponents this season, specifically in their demonstrative 38-7 upset over Oregon. And as for Oregon, the Ducks have faltered in recent weeks. They started hot with a win over Ohio State but lost their traction with losses against the previously-mentioned Utes and Stanford. In summation, it will be exciting to see where these teams end up in January, and whether or not they will be playing in an NY6 game.